The Millennium Falcon is maybe the most iconic ship from the most iconic movie series of all time.  As such, it’s easy fodder for fantastic Lego sets.  There has already been an excellent UCS edition (10179) and a recent edition based off of the Falcon from The Force Awakens (75105).  So what could Lego possibly bring to the table with yet another version?  Oh, I don’t know, maybe the largest Lego set ever put on the market?  7,541 pieces easily sets the record.  Those pieces will cost you a cool $800, but if you’re going to buy the largest Lego set ever sold, at least it’s going to be awesome.  Let’s take a look at some of the notable features. 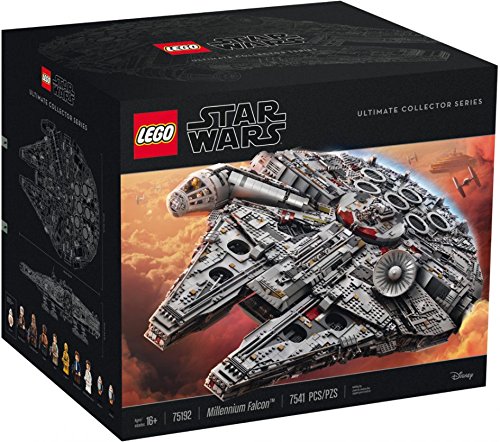 A New Hope or The Force Awakens?

Both! The amazing build can easily switch between trilogies simply by removing/replacing a few pieces, most notably the inclusion, or absence, of the main dish on top.  That’s great and all, but what about old Han vs. young Han?  Worry not, the set comes with minifigurine sets from both the old and recent trilogies.

The full rundown of the ten included:  Original trilogy: Leia, Han, C-3P0.  New triology: Old Han, Rey, Finn, BB-8.  Chewbacca is also included, he covers both.  These aren’t just re-packed figures either, many are exclusives.  The original trilogy figures are modeled after The Empire Strikes back, Han and Leia are completely new designs and include the two-sided heads with the back side having them wear respirators as they did while out and about inside of the giant space slug.  If you’re counting along with me, that only leaves eight minifigures, where a few sentences ago I promised ten, what gives?  Well, the last two are twin “things” which appear in episode 8.  As such, they don’t have names or a purpose yet.  All we know are they are adorable and roughly the size of BB-8.  There is also a mynock, which isn’t quite a minifigure, but does represent those pesky, cable-eating creatures from the movies.

The biggest visual difference on the exterior of the set compared to other versions is how many curves it includes.  As it inevitable without some serious design work, the older versions tended to end up on the blocky side.  That’s not an issue here as brand new pieces have been created to properly capture the look of this fantastic beast of a ship.   Another fantastic exterior feature is a working boarding ramp, perfect for those quick getaways.

This thing is packed with easily accessible interior features.  The classic holo-chess board if, of course, included here, along with easy access to escape pods which should make for some fun playability.  The interior is accessed by removing small panels from the top of the build, this is a change from the previous Falcon with the rotating top panels which, when opened, gave the appearance of a half peeled orange.  Being able to fully remove small panels allows the ship to retain its classic look while granting access to the awesome interior features.

Who knows?  At $800 and 7,500+ pieces, this beast is going to be scrutinized unlike any other set to come before it.  We will get our review posted as soon as I have time to build it.  In the meantime, it can’t be denied how amazing this thing looks.  If you are reading this then you are some combination of Lego and Star Wars fan, and since I comfortably fit in both of those categories I know how fantastic this looks.