The Ninjago line of Lego sets has been a pretty great story to watch unfold.  The series was originally planned to end just a couple of years after it began, but the popularity allowed it to stick around.  It has spawned a popular television series which is now going on seven seasons, and is next in line to receive the Lego Movie treatment.  This particular set includes a really awesome tower with a load of interactive play features, a great looking jet, seven mini-figurines, and a slew of weapons.  The Ninjago sets have always been designed around playability and this set is no exception, there are too many features to list, but rest assured they are there in bunches and a lot of fun.  Or, you know, just check out the official Lego description below. At the time of this writing, The Lighthouse Siege is still available on both Amazon and Lego Shop for MSRP or less.  It has been officially announced by Lego as retiring soon, so we don’t expect supplies to last long. The Ninjago set line has always been a ton of fun, and this set is no exception. As a collector, often the value is tied into aesthetics rather than play, but Ninjago is an exception.  With the movie coming out later this year there will be a ton of new sets released, but also increased demand for older sets like this one.  Since this is truly a really fun set, this one seems like a great set to pick up while you still can. 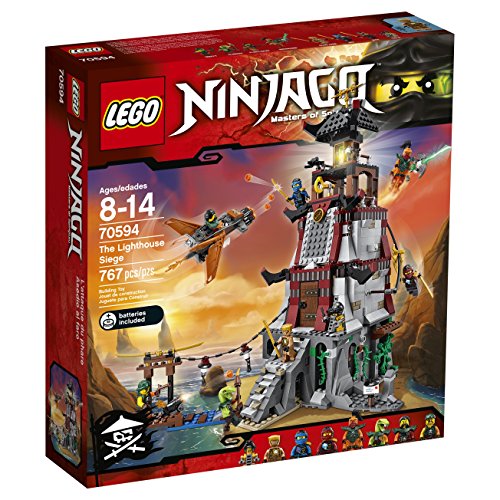 More details on the set from Lego.com: Jay and Nya are seeking refuge in the lighthouse and are setting up loads of traps ready for an attack by the sky pirates. Dodge the rapid-fire shots from the pirates’ jet. Activate the entrance steps’ trap function to send invaders tumbling straight into the prison below. Show your ninja parkour skills to climb up and down the walls or slide down the pipe into combat with the enemy. Tip dynamite on the sky pirates, battle Nadakhan for the Djinn Blade and claim victory!